"I saw you texting during the keynote speech." A couple of teachers whispered this to me as if I had been naughty. I just smiled.

We had just listened to a fantastic opening session by Dr. Austin Buffum, an expert in the Professional Learning Community (PLC) process. Of course, to many people it did look like I was busily sending text messages to one of my friends. Of course, that is exactly not what I was doing. I was tweeting! 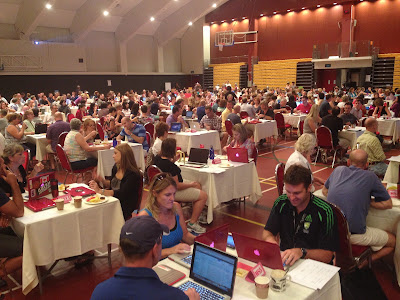 There is an important difference between texting and tweeting. Texting is a private message between two people. A tweet, on the other hand, is a public message that is broadcast out to whomever follows you and has an interest in what you are saying. You have 140 characters to get across a short, sweet point that is tweetworthy.

Many people do not yet see the point of tweeting. "Why would I care what someone eats, or if Ashton Kutcher is having coffee." I agree! For me, however, it is the most valuable professional development tool in my bag of tricks. Who you follow, what you contribute and the conversations that you have are the secrets to the effective use of Twitter.

The list of people I follow is mostly comprised of other educational technology coordinators, coaches, administrators and techy teachers. We all share something in common...the desire to share and a passion for good teaching. Most of us tweet out photos, quips, links, experiences, struggles and celebrations. These tweeps are my Personal Learning Network (PLN) and we all grow from what we share, even though most of us have never met.

So what was I doing during Dr. Buffum's opening address? I was having a rich conversation with other members of the audience who were also tweeting, such as Heather Dowd, Tim Stuart, Anthony Selley, Shaun Kirkwood, John Gaskell and Jemma Hooykaas. We shared the bits that resonated with us and recorded the experience as it happened. This is the way I take notes now during many conferences. Several more SAS faculty in the room were following along with what we were saying, lurking and learning. We used the #sasedu hashtag to tag our school-related tweets and #atplc when referring to PLCs.

Not only were people in the room learning from each other, there were thousands of other Twitter users reading what we were sharing. Kerri-Lee Beasley, a Digital Literacy Coach at UWC was following along. She tweeted:

The power of Twitter comes from the connections we make. It takes time to build up a good list of people to follow and you have to contribute to the conversation to get people to follow you. Once the ball starts rolling, however, it can be one of the most professionally rewarding things you can do.

If you really want to see what I was doing with my nose in my phone and my thumbs frantically tapping away? Check out my Storify round-up of the Twitter action from Day 1: http://storify.com/jayatwood/plc-institute-sas. The next time you see someone on their phone during a workshop ask them, "Were you tweeting?!"

Here are the tweetworthy bits from Day 1 of our Professional Learning Community Institute at SAS.
Posted by Unknown at 9:22 PM No comments:

Getting Sand Everywhere by Jay Atwood is licensed under a Creative Commons Attribution-NonCommercial-ShareAlike 3.0 Unported License.