Blasphemy! I dumped my iPhone

Apparently I have just done something that has horribly offended some people, or rather it offended their perception of me. It was something many people deemed sacred. I switched from an Apple iPhone 5 to a Google (LG) Nexus 4. Gasp!! 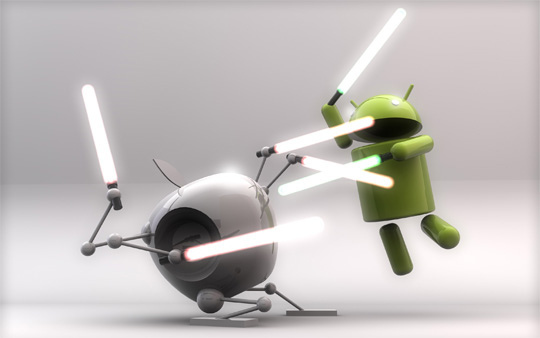 The reaction to my Facebook announcement was funny to me for two reasons. One, I didn't know so many people cared or followed what kind of phone I used. I also didn't realize that I have come across to others as a blind Apple Fanboy. Yes, I have owned just about every kind of Apple product (except for the first generation of any device -- that's always a mistake). I have about five Apple devices within earshot of me right now as the matter of fact. However, I have also owned my share of Windows computers and have even been known to go to a computer market, buy a heap of the requisite motherboards, fans, RAM and hard drives to make my own PC from scratch. Yes, I'm geeky, but I know why.

In recent years people may know me as the guy who, along with Mike Pelletier, was able to instigate and direct the shift from Lenovo to Mac at the largest international school in the world. That was a feat that most thought could not be done. I have also highly recommended MacBooks to just about everyone I know. I even got my grandma to switch -- and she was very comfortable defragging her Windows machine. So I guess I realize why people might have that Fanboy impression of me. The news is, however, that I'm an informed Fanboy. When  information or my needs change, then my allegiances are likely to change as well. That has happened with my choice in smartphone.

Let me start this by saying that I am a power user of my phone. I use it constantly and for just about everything -- except making heaps of phone calls. If you are not an intensive user of the full functions of your mobile phone then my reasons won't be as relevant to you. Phone calls, Whatsapping, shooting food porn and a few games can be easily done on the iPhone. It's very easy, convenient and a stable option. It is also very powerful and ticks a lot of boxes for many, many users. It suited my needs for about 5 years. Now, however, it doesn't.

I did a lot of research and read posts of high end tech users and reviewers who had switched. Their logic made sense to me so I decided to give it a go. Here are some of my reasons.

Bigger screen size with similar resolution
4.7" on the Nexus versus 4.0" for the iPhone. This wasn't my first reason for switching, but after having used the bigger screen it makes a huge difference. It is just as crisp, but I find the Nexus brighter. The additional real estate makes me scoff at the puny size of my iPhone. I think the Nexus is the sweet spot for screen sizes. If it's too much bigger then it basically becomes a small tablet or iPad Mini. Those serve a purpose as well, but not the purposes I have for my smartphone that will always be with me.

Integration of applications
Android phones allow you to easily work between applications and develop seamless workflows. I read a lot of blogs that I subscribe to in Google Reader Feedly. I also use Diigo to organize and save my bookmarks and Evernote for additional information. When reading a blog I can tap the Share button and then choose from all of my applications that can help me out. I can send a link to Diigo, the page to Evernote, share on Google+, LinkedIn or even Remember the Milk. In iOS I might be able to do this with some sort of workaround, such as the Open in/Upload/Sync/Download/Open In features of Dropbox or it may not be possible at all.

I think this is a fatal flaw in iOS. Apps are different than computer applications. Apps are more limited in their functionality by design. This, therefore, necessitates that we use more than one application to accomplish a task. If the apps do not easily talk to each other we are immediately limited in what we can do. Apple has made this a challenge, but Google has put sharing at the core of its operating system.

Customization
The iPhone is sexy. No doubt about it - but they all look the same. Sure you can change the wallpaper, but you can't rearrange the furniture into anything except rows. And some furniture you can't get rid of at all, ever, no matter how hard you try. Just try to delete the Apple Mail app and see how that goes.

Choice of Apps
By design the Apple branded apps are the defaults and these cannot be changed at the system level. Some apps are now allowing you the option to open a hyperlink in something other than Safari, but that's a choice implemented by the app developers and not part of the system itself. As a Gmail user I don't like the Mail app and would rather use the official Gmail app from Google so I can Archive, Star and apply multiple Labels. There are workarounds for doing this on an iPhone, but it's not designed to work that way.

Ease of access to information
From a locked iPhone screen, how many clicks, swipes and flicks does it take you to find out what is on your to do list - or to see when your next appointment is? I'm loving that you can add Android gadgets right to the lock screen. Many apps have a gadget version that can even be put on the app screens. You can mix gadgets and apps on the same page. Genius and convenient.

I like to learn new things
I am a learner and love to explore new things. Being in the ed tech world I think it's embarrassing that I had no knowledge of Android. Of course I can't know everything and I probably won't learn how to program in Android, but I love the challenge of experiencing different things. Android has made some vast improvements and now is quickly closing the gap that iOS had due to its head start.

I like when people are passionate. But passion without understanding can be bad. Why are you passionate about something? That's what is important.

Do I think everyone should switch? NO!! Am I an Apple hater or anti-iPhone? NO!! However, I do think you should understand what it is you like about your phone. To do this you have to know a bit about what other phones can do. Don't be a blind follower. Know why your phone suits YOU.

So that's why I switched. Sorry to disappoint many of you, but it's not blasphemous to switch. I hope you now understand where I'm coming from. As I continue using the Nexus 4 I'm sure I'll come across things I don't like, but I'm really loving what it can do so far.

PS. I'm writing this blog post on a Chromebook. That must mean I REALLY don't like MacBooks as well as iPhones now!

Getting Sand Everywhere by Jay Atwood is licensed under a Creative Commons Attribution-NonCommercial-ShareAlike 3.0 Unported License.